﻿The " Daisy" pictured above owned by  Christian and Will Chum was one of the steamboats that sailed on Findley Lake at the turn of the century. Steamboat appearance paralleled the opening of  The Lakeside Assembly in 1895-1915 which was patterned after Chautauqua .
It is our understanding all steamboats were gone around 1913.  We now have on display a Step-back cupboard that once was in the house of Christian and Will Shum's house ﻿

This is an absolute beautiful stepback cupboard that is being given to the Historical Society by a direct descendant of Alexander Findley.  It will be one of our most treasured  artifacts we have and one we will definitely show off to all our visitors.   Mary will give us more details on the gifts we have received from Margaret Fox Chmiel from Michigan. 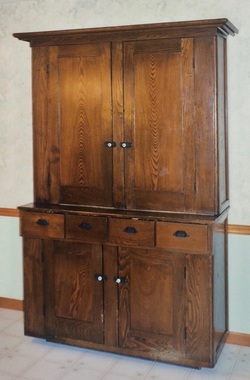 We received a letter from Margaret Fox Chmiel in 2005 stating she had a hutch cupboard that was made in Findley Lake by Harlon Knowles.  It was made of solid wood and mostly butternut.  It was made for Ellen Kysar Shum an Alexander Findley descendent, to be used as a kitchen cupboard.  Her husband Christian Shum built the house on Findley Lake where they lived.  After  their deaths ,their son, Will Shum, kept the cupboard ,  never moving it from its original place.  When Will Shum died it was moved to Oka Thompson’s home in Fndley Lake and upon his death it was moved to Margaret Fox ‘Chmiels home, ending up in Michigan.  All of these people are related to Alexander Findley.  In that 2005 letter Margaret offered the cupboard to the FL & Mina Historical Society.  She put in her will that upon her death it would be shipped at no expense .  Of course we were excited to think this Findley Heirloom might be returned to Findley Lake.  Early September 2016 Stephanie Chmiel informed us of her mother’s death in June 2016. It was in her will the the cupboard be shipped to Findely Lake along with a quilt that was in Ellen Kysar Shum’s house and some photographs of Findley Lake.  On October 27, 2016 the Historical Society received all the items described above and we are very happy that they have returned home.  Mary Norcross
Our President Mary Norcross informs us the Heritage Room at the Community Center has become crowded so she has set up displays of the collection from the Veterans of WW1,WW2,Korean and Vietnam Wars across the hall in the Town Historians room.  Also displayed are the personal affects of Maude Skinner .  She was a native of Mina and teacher for 49 years starting her career in a one room school at  Mina Corners, then moving to the grade school connected to the high school on School Street then finally to the Findley Lake Grade School which is now our Community Center.  You can see all the photo's of the history of our little school and many of the students who passed through the doors.

Our President Mary Norcross has been appointed Town Historian so this should make a seamless historical area for our community.

Her latest report is now up on line - See button above to take you there.
This historical website for Findley Lake and the Mina area is our attempt to better disseminate historic information to our friends and people who are interested in our area . When material is presented we have not attempted to embellish or change in anyway what was given to us for the history of our area.  If notations are unreadable or would not digitally scan well we will attempt to interpret if possible and follow word or phrase with a ?  We will list what pertinent facts we have available, and attempt to give information about the material.

Our small community has many long time residents with fond memories.  They have given freely of their photo albums, biographies and other historic material. Many families can trace their history back to the early 1800's when our area was just a wilderness.

We find that this material is difficult to display at our small museum located in the Findley Lake Community Center. It is our hope that this site will augment and make it easier for people to access this material. We do not know if we will be successful, but it will be our attempt and you will be able to watch our site grow and improve. We hope you will give your comments and suggestions freely for this site is for you.

History is like knowledge in that it has little value unless you can disseminate it to others.

The Story of Alexander Findley 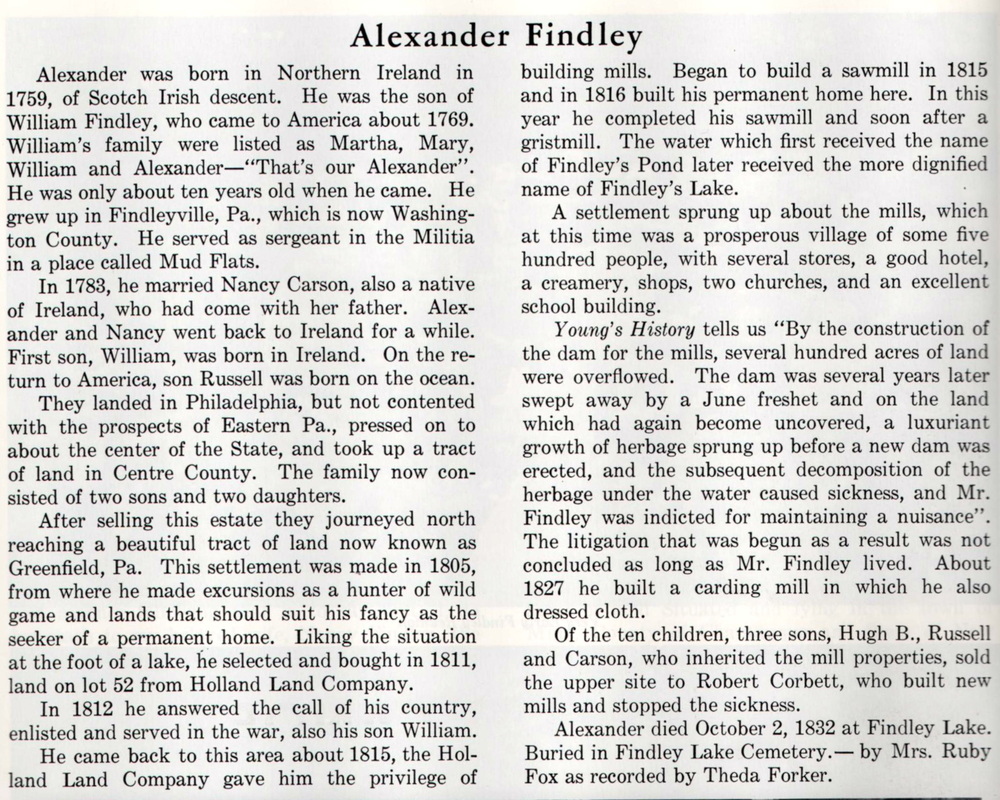 Story of Alexander Findley
The above description of Alexander Findley and the formation of Findley Lake is taken from our Sesquicentennial Book 1824-1974. The building of ponds in the northeast was not unusual in those days, for power of mills and other small industries and the population would grow around such industry .  To many the historic event is not that just a lake was made, but the shear beauty and unique nature of the 300 acre lake that was formed.  The lake today undoubtedly would take nearly an act of congress to build and probably would not be allowed
.
Findley Lake is part of French Creek, one of the most bio-diversified creeks east of the Mississippi River. At one time our creek flowed north into what was then the St. Lawrence River but during the Glacial period reversed its flow and now flows south down to Pittsburgh and eventually into the Gulf of Mexico. This change  combined two different ecosystems creating the great biodiversity.   Findley Lake is considered to be second only to Chautauqua Lake in the county in beauty and recreational value.

You cannot help but wonder, did Mr Findley ever realize the true  beauty of the wonderful lake he made before he passed away.  He was in litigation up until the day he died, indicted for keeping a nuisance  that caused people to be sick.  The cause of which was not in his control. We have to say  he created a beautiful and wonderful lake that we can enjoy for all the generations to come, thanks to one man,  Alexander Findley.

We need you to help us with the history of our area .  If you have anything, read the questions on the form below and send us your information.
​ 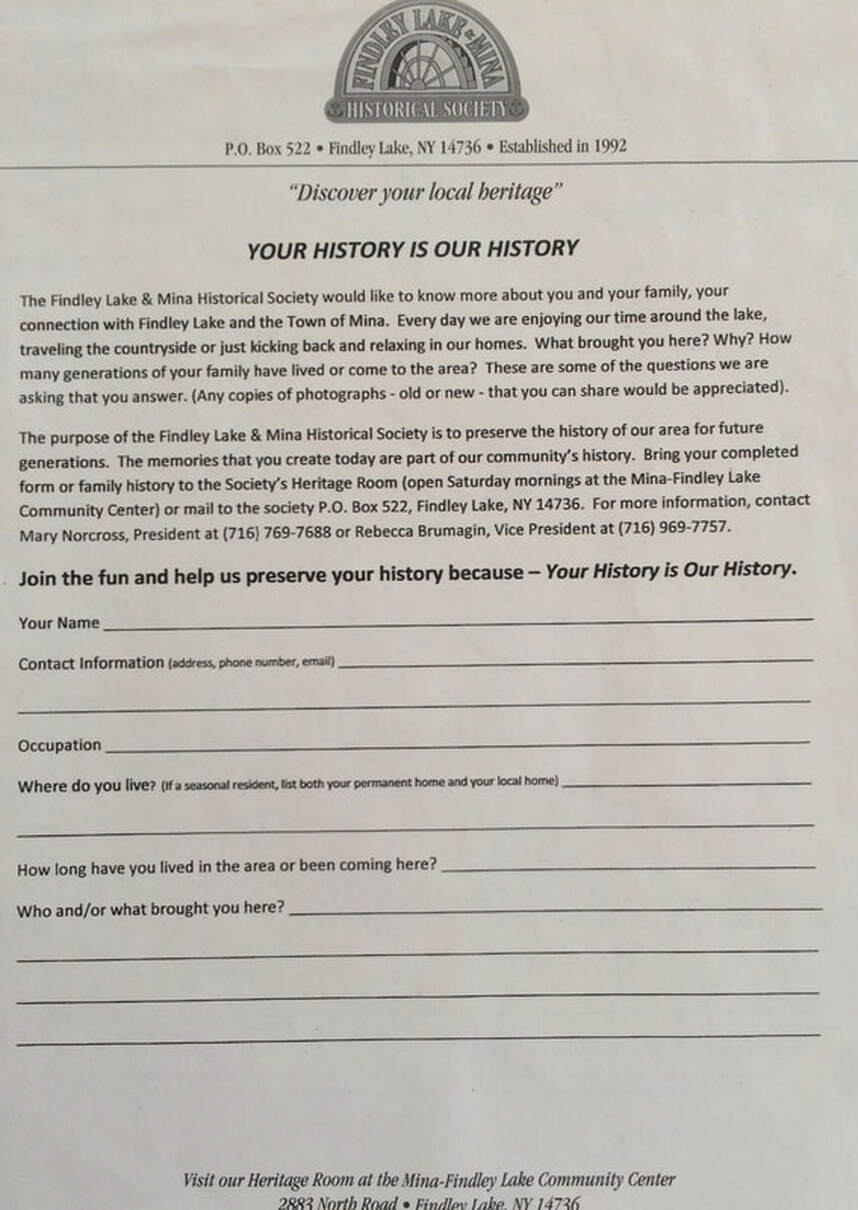 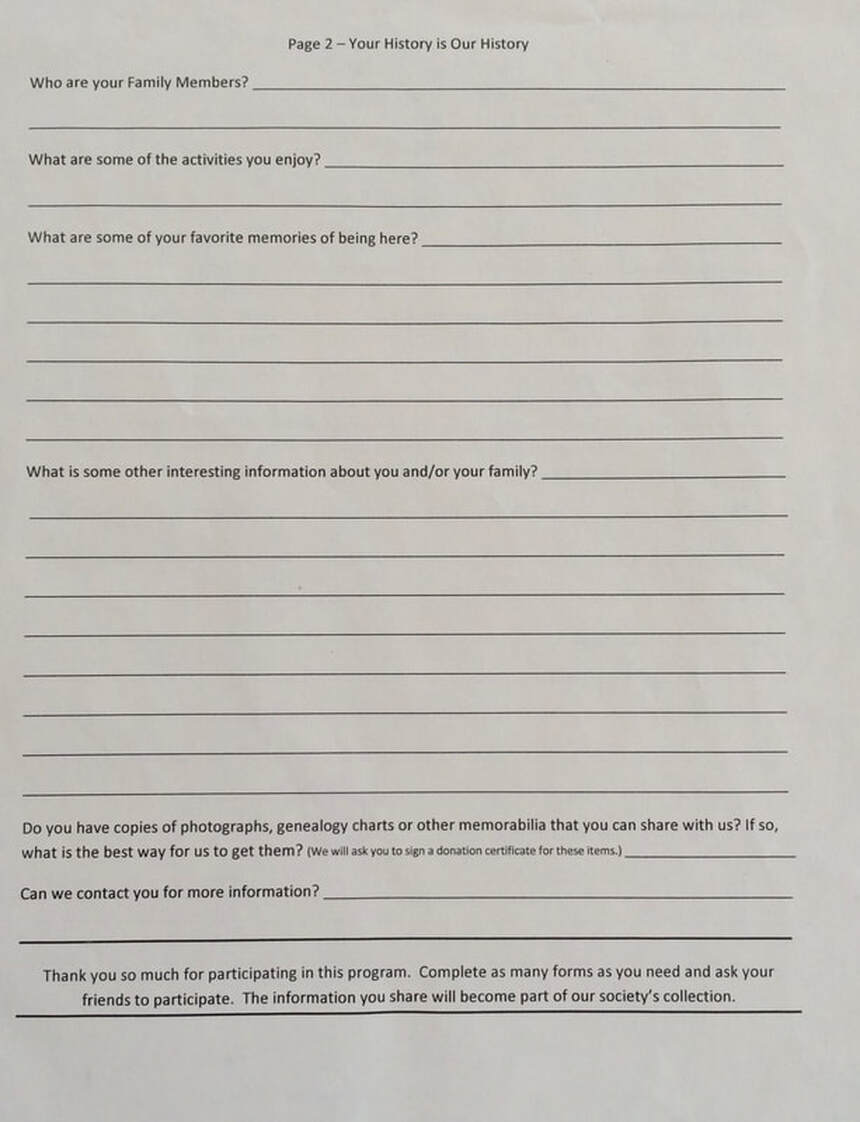