We think of Findley Lake having two islands, but really we have four.  We have the Big Island the Little Island but we also have the Lagoon Island and also a small island.  At one time it was called Goose Island, now it is more like a sand bar seen only when the water is lowered.  Apparently the geese used to spend time on it.
What is now called Paradise Bay on the south end of the lake on the west side was once called Crystal Bay.  You can see why if you live on the east side of the lake in that area. There are times the water just sparkles as you look over to the bay.
Swim ware was made of wool in the early 1900's 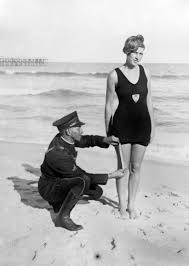 There used to be modesty police on some public beaches
Here we have a policeman measuring the distance from knee to the bottom of swimsuit.  Did she pass?
Findley lake was originally two ponds.  When Alexander Findley built the dam it flooded more land making one pond for floating logs to the saw mill.
There is quite a bit of information about making of the Peak and Peak Ski and Golf Resort.  How it was first a idea by Phil Gravink ,an avid athlete when he was younger at Cornell, and now was  a local farmer in the area.  His first thought was just making a ski slope on his  farm.  As his idea grew and more prominent people were involved it came down to a much larger idea on a grander scale.  The group hired a famous Austrian ski resort developer named Otto Schneibs to come and look over several possible sites to locate this ski way.  Jack Dean relates and I paraphrase.  We arranged for Otto to stay at the Peacock Inn in Mayville.  They started looking at the sites they had on their list .  They came  last to Pekin Hill in French Creek. He put on his skis made it up to the top and came down yodeling through the woods all the way.  He repeated this same procedure.  He then declared “Dis ist gut!”

It was 51 weeks later we had the grand opening of Peak and Peak Ski Resort.  From a small beginning by todays standards it grew to the complex it is today.