Photography became available in cities  and carnivals probably in the 1850's.  They were readily used during the Civil War 10-15 years later.   The first pictures were  made by 3 different methods . Ambrotype ,  Tin types and Danguerro type were the three types that competed. They were introduced at relatively the same time .  Ambrotype came out a little earlier and was made on glass. Tin types and Danguerro types were easier to use and less expensive.The tin type became the favorite.    If you see pictures on glass or metal the early ones are probably  1860-1880's.  Paper pictures as we know it was invented by George Eastman in 1884 .  Ambrotype invented 1851
Under Construction
Pictures on left are old pictures and on the right are present day pictures. 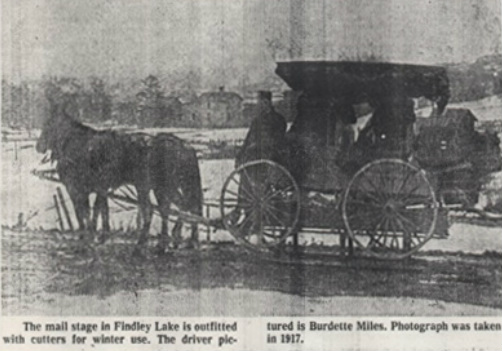 In 1824 Mr. Throop was our first postmaster in Findley Lake. Mail was carried on his back once a week from Mayville. We have accounts that people walked and carried the mail in nearby areas wrapped up carried by hand. In North East they have accounts of Native American runners employed to carry mail by hand.

Mail records are sparse because of a fire in Washington that destroyed pertinent information.
The exact date the stage route started in our area is not certain but we have the above copy of
picture information dated 1917. We believe this was a newspaper account.

An excerpt from a more official Chautauqua Co history is included about the stage beginnings which ran every two weeks.  Apparently the man's name that contracted for the job was Mr. Metcalf. You can see how rudimentary mail and stage service was in the early 1900's. "Metcalf was to keep three wagons and three stage sleighs, and the requisite number of horses. The fare was not to exceed 6 cents a mile for a passage and 14 pounds of baggage; and every additional 150 pounds weight of baggage was to be charged 6 cents a mile, or in that proportion".